“I am challenging all CEOs out there – start your own (4-Day week) trial. You too can work out how to make your place a better work environment through your own trial and letting your team help you find solutions. Your worst-case scenario is that you will gain a more engaged, committed and energized workforce”.

That was a year and a half ago, and it’s probably fair to say that even Andrew Barnes didn’t fully realize the global debate he had started. Since then, the idea of a 4-day week has not only caught the imagination of employees looking for a better work-life balance, but some of the world’s biggest corporations are actively trialing it – with remarkable results. 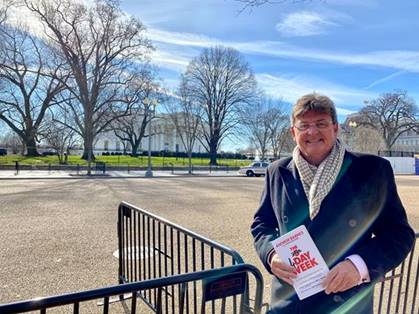 (Pictured above, Andrew Barnes in Washington with his newly launched book, The 4 Day Week)

A year on from Andrew’s Poppulo blog, Microsoft trialed the concept in Japan, a country struggling with massive employee welfare consequences from overwork-life imbalance.

For the month of August 2019, Microsoft’s 2,400 employees took every Friday off, receiving five days pay for working four. The results were staggering: compared with the previous August, Microsoft reported a 40% increase in employee productivity.

The trial also resulted in huge energy and paper usage savings due to closed offices on those Fridays.

Of course, the Perpetual Guardian and Microsoft Japan’s initiatives are a mere drop in the ocean, but momentum is growing for greater flexibility, especially as the digital workplace transforms the very nature of work.

There are also the significant issues of increasing employee burnout and the stubbornly low levels of employee engagement, worldwide.

Andrew Barnes, whose New Zealand company moved from a 4-day week trial to full implementation last August, has just published a book that reveals the inspiration for his idea.

In The 4 Day Week: How the Flexible Work Revolution Can Increase Productivity, Profitability. and Wellbeing, and Create a Sustainable Future, Barnes writes candidly of the personal toll overwork and burnout took on him and his colleagues, how work-induced stress led to the mental breakdown of one of his bosses at an early stage in his career, and to the breakdown of his own marriage.

Then came the turning point, or as he puts it, the moment of crisis and the epiphany.

“I was walking across Rushcutter’s Bay Park in Sydney and contemplating a line from Nick Hornby’s novel Fever Pitch: ‘Is life shit because Arsenal are shit, or the other way round?’ Or rather, was my life in Sydney shit because of my work, or was my work shit because my life was?

“You know you have hit bottom when you are pondering that as a serious philosophical question. In that moment, I admitted to myself that I despised the person I had become. I had to get out. And I made a pact with myself that in every business I worked in from then on, I would do things differently. In the last 18 years of my working life, it has been surprisingly easy to keep this promise.”

Having experienced and witnessed the true cost of a time-based, not productivity-focused, approach to work, Mr. Barnes says, “I vowed that when I got the chance to change things, I would try, and I designed the four-day week to give the best of all worlds: optimal productivity, work-life balance, and benefits for both employees and employers, including company profitability.

The stresses and strains of years of unrelenting work were noticed by Mr. Barnes’s concerned family, and he dedicates The 4 Day Week to his two children – “hopefully they will never have to work the hours their father did” – and his mother Barbara, “who always worried about it.”

“After trialing and implementing it in my own business, I’ve seen what the four-day week can do for productivity and for people’s lives, and I founded 4 Day Week Global with our CEO Charlotte Lockhart to devote much of my time to proving why this model of work is an essential part of the future of work internationally in the age of the gig economy and climate disaster, and why the five-day working week is outdated and no longer fit for purpose in a hyper-connected era.

“With its emphasis on productivity, the four-day week tackles hard issues facing our world, for example, stress and the breakdown in mental health, gender equality in pay, and the climate disaster. Four-day weeks offer significant societal benefits from the relief of congested highways and public transport systems and reduction in healthcare costs through to more harmonious families and more purposeful lives.

“I wrote The 4 Day Week to show business and political leaders, and workers, how we can have a sustainable, profitable future in which we work less, but are more productive, engaged and satisfied. This is a work revolution whose time has come, and the momentum being generated globally is proof. I also wrote the book because so many people called me offering to buy me a coffee and get some advice. I physically cannot drink that much coffee.”