4 things we can learn from neuroscience to communicate better

Invited onto the satirical show, the Colbert Report, the Senator was asked what those 10 Commandments actually were…. He got through some of the basics… don’t murder people or steal from them and depending on whether you believe his PR or not, he didn’t get much further than four.

Why was that? These ten points sum up the moral and legal underpinning framework for the known world.

Now think about the picture below; it’s not important to know who painted it (maybe you know?), but can you tell me something about the characters in this picture? And what’s the story here? 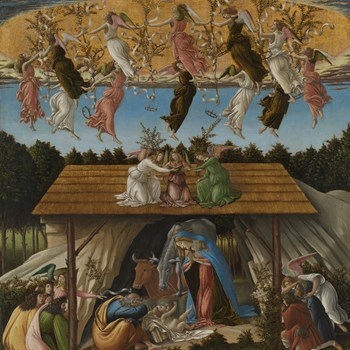 I’m prepared to bet that most of you know at least some of the story, whatever creed or religion you follow. Why is that?

Over hundreds of thousands of years, our brains have developed a lot. For much of that time, reading and writing were for a privileged few. Up until about 150 years ago anyway, two methods of communication were prevalent: stories and pictures.

In evolutionary terms, our brains are simply not yet wired to understand bullet points (like the 10 Commandments); but things like pictures (as beautifully painted as Sandro Botticelli’s Mystic Nativity above) have conveyed meaning and done something in our brains to make that stick. Use stories to convey meaning and ideas; include a picture to support.

Parts of our brains, like the prefrontal cortex where we think, rationalize and plan, have developed a lot; other parts of our brain have not. Since our species’ earliest times our brains have been our first line of defense; we’re able to recognize threats and react quickly.

You’ve probably heard of ‘fight or flight’; it’s our brain’s response to sounds, sights, tastes, touch and smells that just don’t ‘feel’ right. Our reaction to a threat, however, is many times greater than our reaction to reward, why is that?

In scales of importance, the reward of tasty food was always trumped by [the threat of] being eaten by a hungry saber-toothed tiger [which was game over].

When we are faced with a threat, our brain focuses solely on survival, shutting down anything that does not contribute to this (like the ‘thinking’ pre-frontal cortex).

That includes much of our creative thinking. The next time you’re thinking about using a ‘Burning Platform’ as a metaphor to motivate individuals to think creatively about changing, consider that you’ve probably just shut down the creative part of their brain!

That’s not to say never use it; if the action you want is for people to simply stop thinking and do something, it could be appropriate.

Since humans first walked about the savannah, we have depended on social belonging (trust in people like us) as much as we depended on food and shelter. Trust in our social group was as important as being outside that ‘ring of trust’ could end in heightened threat and ultimately death.

Simon Sinek describes how in the US Marine Corp, recruits go through a process in basic training that simply demonstrates how individuals achieve far less on their own, compared to when they do it together as a team.

The consequence is higher performance, and in some cases, what most of us might see as acts of heroism for each other. When questioned about why Marines would, quite literally, risk their lives for their team members, they say “because they would do it for me”.

Most businesses don’t go to the lengths that the US Marine Corp do to train team members, but maybe we could learn something about Trust from them and from the selfless way individuals act on behalf of each other?

Businesses that develop high levels of trust are often characterized as highly engaged. Communications play an important part here: By supporting leaders to communicate openly, by inspiring their people to deliver their part of the business vision.

By facilitating opportunities for leaders to listen to employees, and by finding creative ways to involve team members with how business objectives could be delivered, sowing the seeds of innovation. All ways to build engagement and trust.

Neuroscientists found that knowing you had an incurable disease was easier to compute than not knowing what was wrong with you. This need for certainty is very limiting in any business needing to change since the first reaction of our brain is to regard the change as a threat. Change implies uncertainty and a threat to our status or social group.

From a communication perspective, the context for what is changing and why is key. Even when you don’t have much to say, update people anyway.

Our brains have a remarkable cpaactiy to flil in the gaps and as lnog as the frsit and lsat lteter are in the corecrt palce we can make sense of it!

I have not even scratched the surface of the subject here; you can find out much more from videos by people like Simon Sinek and from reading books like Hilary Scarlett’s The Neuroscience of Organisational Change.