When I heard GSK was piloting an all-company email newsletter that would serve targeted content to more than 100,000 employees and were on the hunt for an editor – I leapt at the chance.

It didn’t surprise me at all that they were attempting to go where no company had gone before to serve employees relevant, dynamic content. I’d worked for the healthcare company before and knew they were no stranger when it came to testing bold, brilliant and – let’s face it- slightly bonkers ideas on a global scale.

Also, how could I resist an opportunity to either fail or succeed in a very public fashion?

I joined and less than two months later we launched Your GSK News, our first all-company collaborative email newsletter which delivers relevant and targeted content to our entire population of 130,000+ employees on a fortnightly basis.

What makes it collaborative? Although it’s centrally pulled together, each edition has 200+ articles on average, which are produced by more than 220 communicators at GSK. For me, that really sums GSK up. Lots of companies send email newsletters, but very few would invite a cast of hundreds to be responsible for the content that goes in them.

How we built and then tamed our email monster

Content is written in 13 different languages and targeted to 198 possible audience groups, but employees only receive news targeted to them based on their role, business unit, and geography.

The newsletter goes out every other Thursday, and straight away we meet as a board to share our content plans and start pulling together the next edition. There is no downtime in this newsletter. 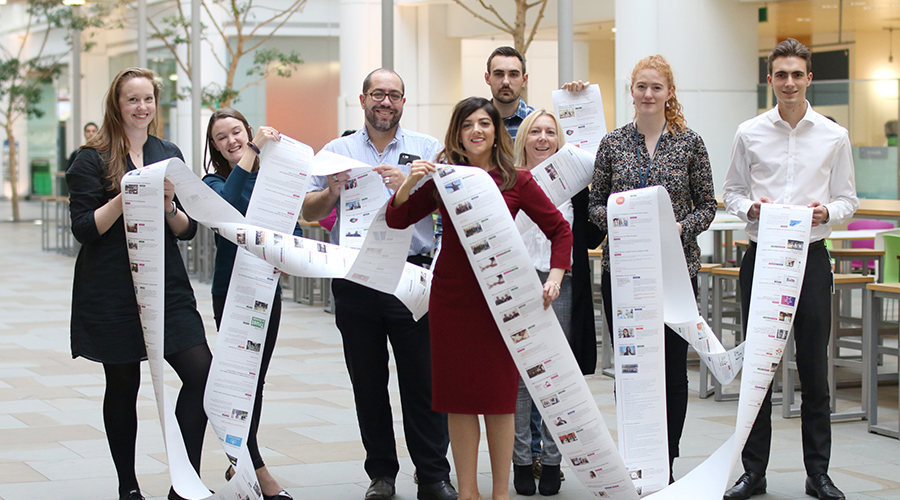 What a wrap! Members of the editorial board with a printed version of the full Your GSK News first edition. Content targeting and audience segmentation through Poppulo resulted in GSK’s 130,000+ global workforce receiving content relevant to them.

It’s a long way from where we started. Prior to Your GSK News there were hundreds of email newsletters across the company. They weren’t centrally managed, could land in employees’ inboxes at any given time, had an inconsistent look and feel and duplicative or contradictory messaging.

It was for this very reason that Your GSK News was born. We’ve been on a journey to serve employees with less, but more relevant content. In a big company, there can be a lot of noise. One of the primary purposes of Your GSK News is to tame that noise into submission.

We were also tasked, as internal communicators, to reduce email more broadly and engage our employees in our new company strategy and objectives. A consolidated ‘one voice’ newsletter lets us do just that.

I’m not going to lie: it takes a lot of time and resource to make something like this work. In addition to my full-time editor role, we also have a Channel Manager, my colleague Joe Lees, and support from an offshore team in India. We also had lots of help from our Poppulo Customer Success Manager, Louisa Nash, who was instrumental in helping us deliver this project.

There were lots of late nights, coffee and junk food in the early days. On our first production night, we stayed in the office until 11 pm. Six months later, and we were finally out the door at a normal hour. A sense of humor is vital when working on something like this. I’m really lucky to work with such great people, who make me laugh every day. It’s been incredibly fulfilling and a lot of fun. 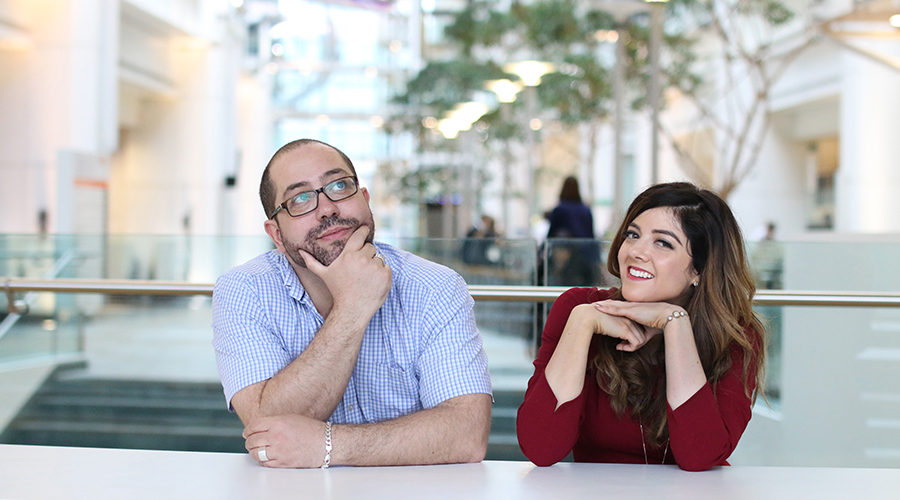 You havin’ a laugh? For Chelsea, Joe Lees - Manager of Internal Digital Channels - and the rest of the team, a sense of humor has been vital to making Your GSK News the huge success that it is today.

Skin in the game: building an editorial meritocracy

One of the biggest selling points to land Your GSK News with our comms colleagues was the fact that local news would appear first in the newsletter – and global, corporate news would appear at the bottom. Allowing local communicators to contribute news in their own language was also crucial.

A fundamental principle of Your GSK News – also the key to its success – has been that it is run by a committee of contributors, who have a vested interest in the channel.

We try not to undervalue this relationship. We run important decisions past them and give them a say in how the newsletter works. They voted on the name Your GSK News and decided at what cadence it would be sent, and on what day.

Everything is decided by committee. I’m just the person who brings it all together and tries to keep everyone happy. It’s not always easy. In fact, sometimes it’s impossible. I’ve grown to become a bit of an expert in the art of the apology!

The relationship works both ways. We ask our contributors to attend our fortnightly editorial board, which was specially created to support this new channel. Everyone shares their upcoming content plans in the board, we review how the last newsletter performed and celebrate those who have made a significant contribution.

The core team owns the channel, but our contributors ultimately own their own content and the factual accuracy of it, as well as their audience and ensuring their distribution is kept up-to-date.

The network that we have been able to build as a result of Your GSK News is the real achievement. Not the fact that we were able to persuade people to kill off their own newsletters – although that was a feat in its own right – but the fact that we were able to help communicators start sharing what they were doing, to forward plan - and to all start pulling together in the same direction.

We’ve been able to increase editorial capability across our network – running clinics and workshops on everything from our brand and visual identity, to editorial top tips and data and insights. We also started mandatory fortnightly onboarding sessions to train new contributors on our content requirements, process and rules of engagement before we let them loose in the channel.

This project wasn’t without its challenges. I’m pretty sure I was the most unpopular person in comms at GSK for several months – so if you want to have no friends at work, this is the kind of project you should work on! In all seriousness, when you have 220+ contributors, plus all their stakeholders and extended network –you’ll be balancing lots of different and sometimes conflicting demands and expectations.

Even the people most resistant to change, can usually at least be swayed by facts and the voice of the customer. Capture this and share it. It’s going to be your best friend.

According to our employee feedback, for example, we were on the right track. On average 93% of employees surveyed said Your GSK News helps them understand our strategic priorities. 90% also said Your GSK News was relevant to them – a sign that our audience segmentation was working as intended.

One of the biggest challenges initially was that our contributors were used to working autonomously, out of the clutches of the global central team. To be frank, many resented us inserting ourselves into a process they had been perfectly fine doing on their own and proposing edits to their work.

I’ve had to adapt my own editing style to be more collaborative and accept that sometimes our contributors know their own audiences much better than I do. 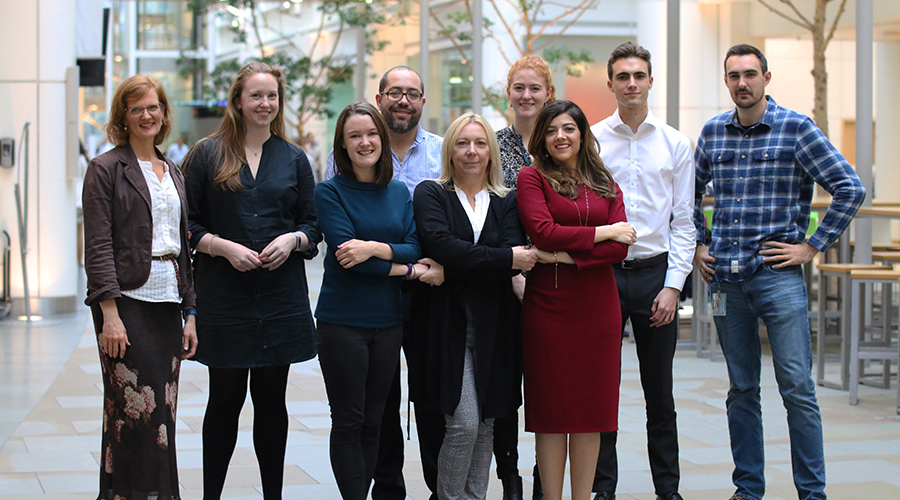 Another challenge was trying to get our contributors to limit the amount of content that they were including so that our audience wouldn’t receive the world’s longest newsletter. I think we’re in a different place now, in part due to YGN. Increasingly the question ‘Why does my audience need to see this news now?’ has become part of the conversation. Or, to go one step further, should I email news to my audience at all or should email only be used for mandatory need-to-know items?

Could you or should you do this in your organization?

If you’re considering doing this in your own organization – just a few words of wisdom. Whatever you decide to do, make sure your strategic objectives are guiding your decision making. In our case, it was reducing the volume of email-based communication and increasing the relevance of our content for employees.

A strong senior sponsor is essential, but don’t forget to get your internal grassroots involved and give them some skin in the game. Just be aware that you’ll have a team of very powerful individuals. They have a voice now, and they will use it.

At the risk of blowing my own horn, I also have to say that the dedicated editor role is a must have – as is a regular forum, like an editorial board.

Whatever you decide to do, planning is crucial. Before I even joined the project, the team had spent months planning and prototyping. We ran three full-scale rehearsals – giving us the time and space to experiment and improve our audience segmentation, process, and template. It definitely doesn’t have to be completely perfect at launch, but test and learn as much as you can.

And most importantly, have fun.