Recognized as one of Ireland’s best workplaces, Newsweaver wins special award for listening to employees 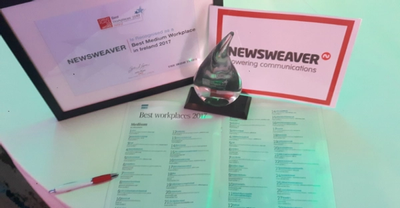 A special award for listening and communicating with employees was granted to internal communications software and services company Newsweaver at last night’s Best Workplaces in Ireland awards, the company is delighted to announce.

Newsweaver was also recognised as one of Ireland’s best workplaces for the third consecutive year. This year was its first year taking part in the medium business category for companies of more than 100 employees, due to the phenomenal growth of the business over the past 14 months.

Speaking about the wins, Yvonne Frost, Head of People Operations at Newsweaver said:

“It means so much to us to be recognised once again as one of Ireland’s best workplaces, especially given that we have grown so much in the past year. We have doubled our workforce in the past 14 months, and we did worry that our growth might compromise the things that made us a great small company: our warmth and friendliness, the trust we have for each other, our ability to listen, engage, motivate and inspire.

We are absolutely thrilled that not only have we not lost these things, we have in fact gained so much more in welcoming so many new employees, and with everything they individually bring to the company, we are all the richer for their input. It is such an honour to have this recognised, with Newsweaver now being ranked higher than ever before, and winning a special award for listening, which is something that we work hard to engender in every part of the organisation,” said Yvonne.

The special award for listening honoured Newsweaver’s SWOT to Strategy project, through which CEO Andrew O’Shaughnessy engaged in workshops with representatives from every team in the company to listen to, identify and analyse strengths, weaknesses, opportunities and threats (SWOT). Andrew listened to each team’s perspective on what the company needed to focus on, then built a strategic plan targeting every element of the SWOT analysis.

“As global leaders in the internal communications industry, two way communication is something we strive to cultivate every day, in every team. Actively listening and engaging in dialogue underpins everything we do at Newsweaver, so it was a particular honour to receive the award for listening to our employees, which we believe plays a critical role in enabling healthy employee engagement and effective internal communication.” — Andrew O’Shaughnessy

Recognition as one of the country’s best workplaces was based on an in-depth, company-wide employee survey and an assessment of Newsweaver’s policies and practices.

Newsweaver is the global leader of internal communications software and services, placing people at the heart of everything we do.