The 4 Things Dad’s Army Taught Me About Effective Leadership

Suprisingly, Captain Mainwaring has a lot to teach us about effective leadership

As a veritable who’s who of the British film world assembled in London on Friday for the premiere of the new Dad’s Army movie. I was taken back to rainy Sunday afternoons watching re-runs of the 80 episode BBC television series set in World War II.

The 2016 movie has received somewhat mixed reviews. However, the television series remains a firm favourite, beating Fawlty Towers to rank number 4 in the countdown of Britain's Best Loved Sitcoms.

The show follows the adventures of the British Home Guard in the fictional town of Walmington-on-sea in the 1940s. The British Home Guard are a group of local volunteers ineligible for military service, either because of age (hence the name) or because of professional or medical exemption. This particular group of misfits are formed, trained and held together under the unique leadership style of Captain Mainwaring.

Captain Mainwaring is the local bank manager and self appointed commander. He is described as pompous and overly confident due to his position as platoon leader and social position in Walmington-on-sea. But he does show many redeeming qualities: he is essentially brave, loyal, and industrious, generally kind-hearted beneath the bluster, and unfailingly patriotic. It is the mixture of these characteristics that make much of the comedy and sets Mainwaring up as an unique and interesting leader.

Here is a list of some of the skills Captain Mainwaring has taught me about effective leadership:

1. Connect everyone to the strategy

In the opening episodes of series one, we see Captain Mainwaring and his second in command, Wilson, provide instruction to the raggle taggle group of volunteers. A group of mixed age and abilities, Mainwaring finds a way to communicate the need for the group, set out clearly the rules and regulations and ignites in them a sense of common purpose.

Engaged Employees are 60%more likely to be motivated to do their very best for their employer.

By the end of the first series, he has managed to pull the group of shopkeepers and bank clerks "up by their bootstraps" to become some kind of fighting unit. Engaging both the older members like Godfrey and Jones and the youngest recruit, Pike.

Great leaders know the value of listening. You can’t simply broadcast and repeat the company vision and strategy to employees and expect them to feel inspired. It is essential to get employee input and feedback and to ensure that employees feel that their contributions are valued and acted upon.

Captain Mainwaring may have been full of bluster but he did create an environment where volunteers felt they could have open and honest discussions. In the poignant episode ’Branded’ Godfrey is identified as a conscientious objector. Mainwaring is initially appalled and the group shun Godfrey, but it comes to light that he still served during the war as a stretcher bearer, earning the Military Medal for rescuing numerous wounded soldiers across No-Man’s Land under heavy fire, something he downplays. Mainwaring immediately declares Godfrey the platoon’s medical orderly.

3. Use the right channels to communicate

While Captain Mainwaring didn’t have the benefit of email and Enterprise Social Networks (ESNs) in the 1940s, he did use every medium in his communications arsenal including written instruction, posters and face to face channels to communicate with the platoon. He carefully chose the channel that best fit the message he needed to deliver, considering his audience and the level of detail needed.

Both email and ESNs are essential weapons in the leadership arsenal today. The Newsweaver/Meldrum's ‘IC and Technology’ Survey found that not only is email the most used communication channel by internal communicators, but also the most effective.

Target messages to the right employees - Securely communicate leadership communications to all impacted employees, embedding videos, images, surveys, polls and other rich media.
Ensure message reaches all employees – Using a real-time metrics dashboard; measure employee engagement across the organization. Team leaders can use this insight to confirm that all employees have received and understand the message.
Embed and push out leader videos – Videos created in HQ can be embedded and pushed out to every employee. Delivering a video into the inbox ensures important messages are received and understood across a culturally diverse and distributed workforce.

ESNs are pushing executives to engage more closely with employees and stakeholders. Your employees expect to be able to ask questions – build in opportunities where leaders can demonstrate that they listen to staff. Allow for real-time feedback and commenting, and make sure a follow-up to employees shows them that their feedback has been received and acted on. Find out more about why leaders should use social media.

4. Use advisors and coaching to increase their influence

Captain Mainwaring isn’t a natural communicator he often overcomplicates the message, and so he relies heavily on Wilson to communicate with the platoon and get the most out of each member of the volunteer guard. Internal communicators are best placed to advise and coach senior leaders. It is the role of the internal communicator to help executives create and deliver communications that increase employee understanding and buy-in. Encourage leaders to communicate clearly and convey confidence and empathy. They should avoid business jargon, and instead speak honestly and in their own distinctive voice.

The 2016 film (there was an earlier film created in 1971) is set during 1944 Captain Mainwaring's Home Guard suffers from low morale and MI5 have discovered a radio signal from Walmington-on-Sea, they have a spy in their midst. On top of this a glamorous journalist arrives (Catherine Zeta-Jones) to report on the platoon's exploits and begins to ruffle feathers.

It is up to Captain Mainwaring again to take charge of the situation and lead the village and the platoon through these uncertain times.

Today, it remains essential for employees to hear news from the top. Leaders in the digital age must be good communicators, offer transparency to employees and open up dialogue to encourage feedback from employees. The role of internal communicator has moved from just managing communications to helping leaders communicate better to employees.

No blog post on Dad’s Army would be complete without the funniest clip from the best loved episode "The Deadly Attachment”. 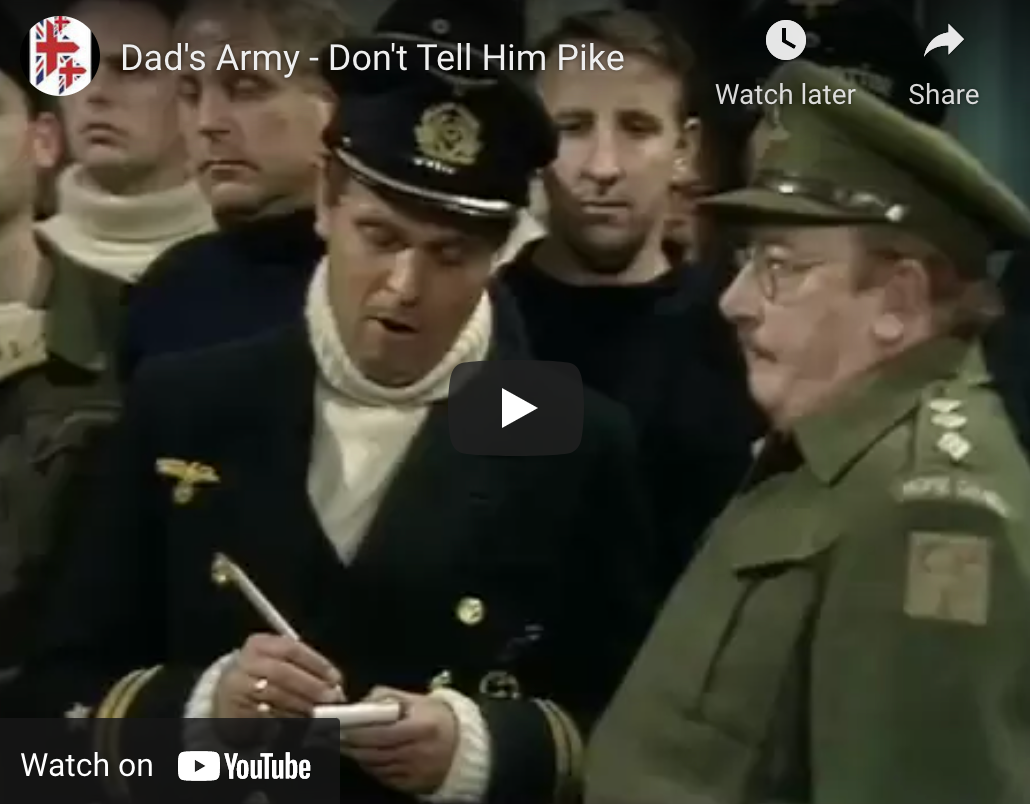